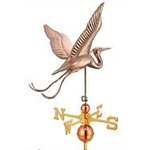 Blue herons and egrets are long-legged freshwater and coastal with 64 recognized species. However, egrets are not a biologically distinct group from the herons, and tend to be named differently because they are mainly white or have decorative plumes. Although egrets have the same build as herons, they tend to be smaller.

Although blue herons resemble birds in some other families, such as the storks, ibises, spoonbills and cranes, they differ from these in flying with their necks retracted, not outstretched. They are also one of the bird groups that have powder down. Some members of this group nest colonially in trees, while others, notably the bitterns, use reed beds.