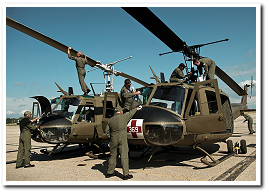 Bell UH-1 "Huey" & Jet Ranger Weathervanes
The Bell UH-1 Iroquois (nicknamed "Huey") is a utility military helicopter powered by a single turboshaft engine, with two-blade main and tail rotors. The first member of the prolific Huey family, it was developed by Bell Helicopter to meet a United States Army's 1952 requirement for a medical evacuation and utility helicopter, and first flew in 1956.
The UH-1 was the first turbine-powered helicopter produced for the United States military, and more than 16,000 have been built since 1960. The Iroquois was originally designated HU-1, hence the Huey nickname, which has remained in common use, despite the official re-designation to UH-1 in 1962. The UH-1 first saw service in combat operations during the Vietnam War, with around 7,000 helicopters deployed. The Bell 204 and 205 are Iroquois versions developed for the civil market.
LIVE ACTION VIDEOS FROM HUEY 369 HERITAGE EVENT 2019

Our exclusive recreation of the famous "Huey" as a weathervane is sure to please anyone and everyone that has a part of their life that involved this faithful bird. The entire weathervane can be assembled in just 5 minutes and mounting doesn't require any more than a common hand screwdriver for assembly and a powered screw driver for mounting.
TOTAL SIZE (FIGURE WITH POST AND MOUNT): 21 in. long x 24 in. high
ARROW POINT TO QUIL SIZE: 21 in. long
FIGURE WITH ARROW SIZE: 21 in. long x 4 3/4 in. high (copter only is 15.5 in. L and rotors are 14 in. wide)
Compare Selected
×