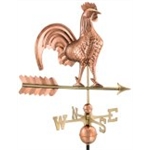 Rooster weathervanes perfectly represent the traditional rooster that is often portrayed as crowing at the break of dawn ("cock-a-doodle-doo") and a crowing or strutting rooster weathervane is a great way to honor the tradition. However, this idea is more romantic than real, as a rooster can and will crow at any time of the day. While some roosters are especially vociferous, crowing almost constantly, while others only crow a few times a day, a rooster weathervane atop your home, barn or garage will surely invoke the vision or memory of a crowing rooster around the clock.

Roosters have several other calls as well, and can cluck, similar to the hen. Roosters occasionally make a patterned series of clucks to attract hens to a source of food, the same way a mother hen does for her chicks. These differences are dependent both upon the rooster's breed and individual personality. A rooster can often be seen sitting on fence posts or other objects, where he crows to proclaim his territory.